According to Pew Research, we live in a digitally connected world where 71% of Americans turn to social media platforms to get their news content. We no longer are limited to conversing with friends at school or our colleagues in the office; in a matter of seconds, we can broadcast news traveling across the globe – every like, retweet, or share, adding credibility to the original post regardless of its factual authenticity.  The original version of a story can quickly be shared, becoming a digital telephone game where the narrative has morphed into an entirely different story.  Social media has given us an incredible opportunity to learn more about the world, connect with people, and learn things we would have never known otherwise, but with any great innovation comes tremendous responsibility.

In this brief, Overwatch reports some of the significant events leading to the growth of misinformation, examples, and the impact it has on today’s society, economy, and businesses.

Today, an incredible amount of information is available at our digital fingertips.  It is estimated that at least 2.5 quintillion bytes of data are added to the internet daily. Google alone processes approximately 63,000 search queries every second, translating to 5.6 billion daily searches and about 2 trillion global searches annually.  The average person conducts between three and four daily searches, exposing us to multiple perspectives and opinions of every news story. Even then, as people turn to the world’s best search engine, former CEO of Google, Eric Schmidt, tells the world that 99% of the data is hidden. 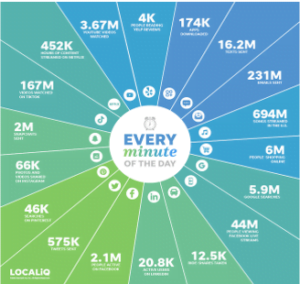 This means it will become more difficult to spot what Dr. Wardle and Dr. Derakhshan call information disorder.

What is Information Disorder?

Claire Wardle, Ph.D., and Hossein Derakhshan reframe fake news as information disorder, a spectrum that ranges from falseness to intent to harm. Breaking the concept into specific terms helps us understand how it operates and causes harm. Wardle and Derakhshan use a Venn diagram to explain information disorder as having three parts, including:

Whether we trust the news or not, news stories tremendously impact our daily economy and business decisions.  There has been significant research in this area over the past few years.  A research team led by Alison Holman and her colleagues at the University of California, Irvine, reported in their article published by the British Broadcasting Corporation (BBC), reinforced that being first, and getting it wrong, can be detrimental to our health.  “It turns out that news coverage is far more than a benign source of facts.  From our attitudes to immigrants to the content of our dreams, it can sneak into our subconscious and meddle with our lives in surprising ways.  It can lead us to miscalculate certain risks, shape our views of foreign countries, and possibly influence the health of entire economies.  It can increase our risk of developing post-traumatic stress, anxiety, and depression.  Now there’s emerging evidence that the emotional fallout of news coverage can even affect our physical health – increasing our chances of having a heart attack or developing health problems years later.”

The information age is still in its infancy, and innovation speed is ever-increasing.  Our exposure to more information will only increase as advanced technologies are invented, making us more reliant on the Internet of Things (IoT).  In turn, the challenge will be sifting through the vast amounts of information to make informed decisions in a timely manner.

Information disorder has proven to impact our infrastructure, our economy, and even divided our communities.  Fortunately, there are technologies available to assist us with finding accurate information faster, but they are not being developed at a pace to keep up with the spread of information.  To manage the impact of information disorder, we must emphasize critical thinking skills and continue investing in technologies that enable businesses and the government to identify and validate content.

Critical thinking is a crucial skill set to empower us to share accurate information for practical analysis.  One of the best ways to improve your critical thinking skills is by reading books published by The Critical Thinking Foundation, including The Thinker’s Guide to How to Detect Media Bias and Propaganda, which provides the reader with an entire critical thinking framework to spot and assess propaganda.

Here are the questions they suggest we ask ourselves when analyzing and interpreting news stories:

This data is an excellent example of why Open-Source Intelligence is an emerging field and why companies adopting the discipline early will have a competitive advantage before it becomes necessary.  In short, whether you are a consumer, the media, or a brand, you could save a great deal of money by doing your due diligence in validating the information you read online and sharing responsibly.

Get Overwatch delivered directly to your inbox every Tuesday & Thursday at 9am EST.