Since our February 17, 2022, Overwatch brief on the fentanyl crisis, the problem persists throughout communities nationwide. In addition, law enforcement agencies are seizing historical levels of the deadly drug.

For example, on March 4, 2022, authorities in Portland, Oregon, confiscated 150,000 counterfeit oxycodone pills laced with fentanyl and twenty pounds of fentanyl powder. According to KGW, it is the largest drug seizure in Oregon’s history.

Further, the Philadelphia Inquirer reported that Pennsylvania Attorney General’s narcotics investigators seized more fentanyl in the first three months of 2022 than all of 2021. Analysts note that these are just a few examples of the historic amounts of fentanyl seized in the United States.

With our previous fentanyl brief, we assessed, “Until social media platforms like Instagram and websites like Google thoroughly monitor and remove posts that mention illegal drugs; dealers will take advantage of the open web to sell illegal and controlled substances.” Our most recent research on fentanyl supports this assessment.

For this brief, we used OSINT to identify people trying to sell fentanyl on Flickr, which has 112 million users. In addition, we looked at how the social media platform Pinterest, which has 478 million users, is preventing pro-drug content on its platform.

Flickr is one of the most popular photo uploading sites in the world. Flickr’s Community Guidelines reads, “Don’t upload content that is illegal or prohibited. This includes but is not limited to drug use, bestiality, and terrorism. If we find you doing it, your account will be deleted, and we’ll take appropriate action, which may include reporting you to law enforcement.”

However, on April 24, 2022, Flickr user Mark Emilio uploaded a photo of a vial supposedly containing fentanyl. With the image, Emilio wrote, “Buy Fentanyl Online,” and provided a URL on the open web to purchase the lethal drug. 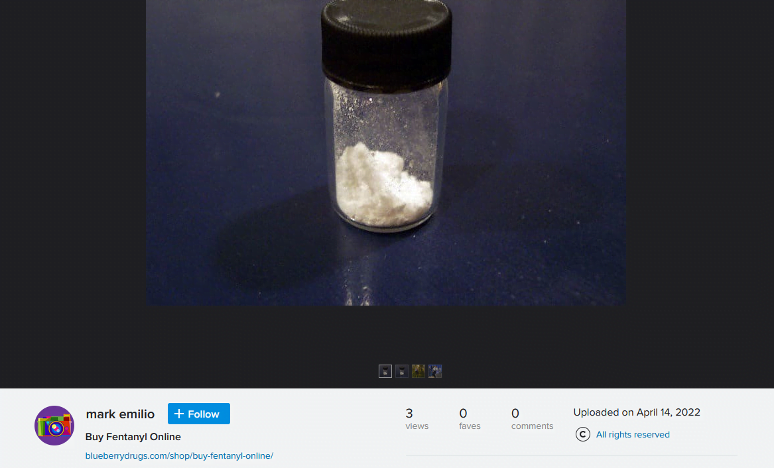 Despite its direct violation of Flickr’s community guidelines, the post has not been flagged or removed.

On April 16, 2022, Flickr user Chucksy Pills uploaded an image of what they claim is ketamine hydrochloride, a controlled substance. In the caption with the picture, Chucksy Pills provided his WhatsApp and Telegram account information, saying that he sells a variety of hardcore drugs, including fentanyl. 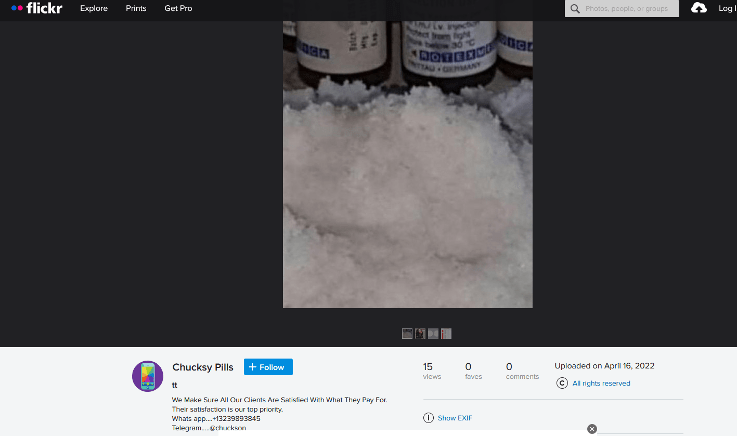 On February 16, 2022, Flickr user, Thomas Bills, posted an image of supposed carfentanil powder, a synthetic opioid. Thomas Bills wrote in his post, “Buy Carfentanil POWDER or carfentanyl is a structural analog of the synthetic opioid analgesic fentanyl. Short acting and with fast onset, it has, weight for weight, around one hundred times stronger effects than fentanyl and thousands of times stronger than heroin.”

Additionally, Thomas Bills provided a URL to the website for people to purchase the carfentanil powder.

We followed the link to the website and searched for fentanyl, which returned three results. 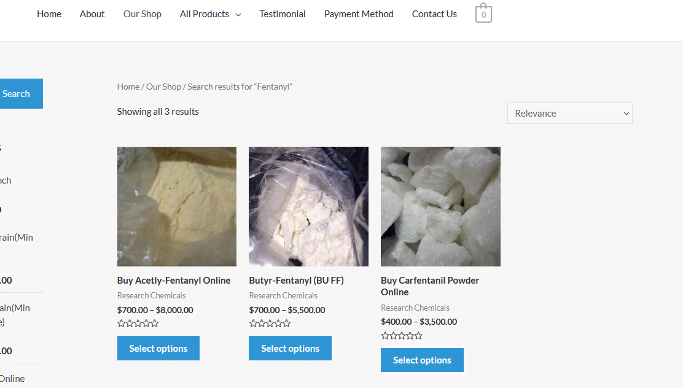 Like most open web drug markets, payments can be made from Western Union, with Bitcoin, or through a payment app like Zelle or Venmo.

On Instagram, we found an account that provides a Snapchat username where, allegedly, people can reach out and buy fentanyl. 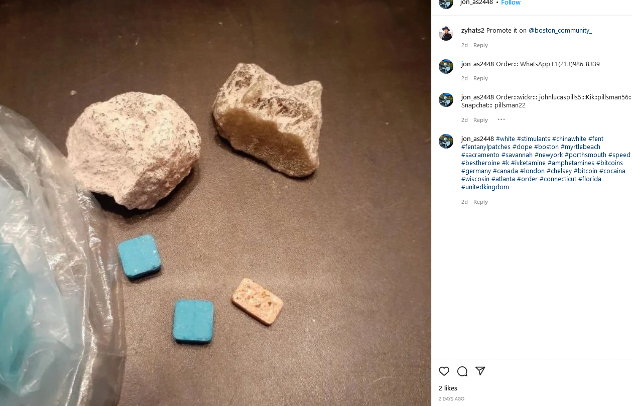 ‘This is the first time analysts have seen Snapchat used as a communication method for drugs. Pillsman22’s Snapchat account did not provide any important information, likely because analysts could not see his content without connecting with him.

Further queries on the Pillsman22 username returned no new information.

When analysts queried ChinaWhite, one of many street names for fentanyl on the platform, we received an alert from Pinterest.

The alert reads, “If you or someone you know is struggling with addiction, help is available. If you have unused or expired prescription drugs you’d like to get rid of, find a disposal spot near you.”

In addition, when we searched for fentanyl, the first results on the platform regarded the danger of the drug.

On May 19, 2022, the New York Times published an article titled: Fentanyl Tainted Pills Bought on Social Media Cause Youth Drug Deaths to Soar.

The article reads, in part, “Mr. Webb’s death was one of nearly 108,000 drug fatalities in the United States last year, a record, according to preliminary numbers released this month by the Centers for Disease Control and Prevention. Law enforcement authorities say an alarming portion of them unfolded the same way as his: from counterfeit pills tainted with fentanyl that teenagers and young adults bought over social media.” The article also reports that Snapchat is one of the platforms being used by youth to buy drugs.”

The New York Times’ writing supports our February 2022 brief about fentanyl and our ongoing research on this problem set. Additionally, according to Volteface, “an independent research and advocacy organization that seeks to reduce the harm drugs pose to individuals and society, through evidence-based policy reform,” one in four young people reports seeing drugs sold on social media.

The fentanyl crisis will continue to impact minors as social media platforms fail to flag content about fentanyl and other hardcore drugs. The failure to flag the imagery and contact information of drug dealers online will lead to more youth having exposure to the drug and potentially finding ways to purchase it. Additionally, with the fentanyl crisis impacting communities nationwide, we assess that there will be more significant initiatives to educate about the use of fentanyl. We may see social media platforms follow a similar rule to Pinterest, providing awareness about the dangers of the deadly drug.

Should social media platforms do better at policing drug content, criminals will adapt, identifying other open-source platforms they can use to solicit their illegal goods. Those platforms could be smaller social media properties, drug websites that accept payments for illegal goods in cryptocurrency, Western Union, or other apps like Venmo and Zelle.

As fentanyl seizures continue to hit historical levels, we anticipate that more lawmakers at the state and federal levels will develop legislation to combat the fentanyl problem. For example, Colorado’s new fentanyl law will allow police to charge anyone with more than a gram of fentanyl in their possession. While some people may view this law as extreme, Colorado sees it as a way to keep the drug off the streets.

Echo Analytics Group will continue to use open-source intelligence (OSINT) to monitor the sale of fentanyl on social media. #OSINTforGood

If you or anyone you know struggles with drug and alcohol addiction, please reach out for help through the National Drug Helpline: Addiction Hotline  or (844)289-0879.

Get Overwatch delivered directly to your inbox every Tuesday & Thursday at 9am EST.